Today is a great day for the European Space Agency. Its governing ministerial council approved a 17% increase in funding, pledged to support the International Space Station until 2030 and pledged to ensure that the Rosalind Franklin rover travels to Mars after the derailment of the Euro-Russian ExoMars project by Russia’s invasion of Ukraine. On top of all this, ESA has announced a new class of astronauts.

ESA Director General Josef Aschbacher has welcomed the Council’s approval of a 17% funding increase, even though it is less than the 25% increase he had requested, noting economic difficulties in Europe at the moment because of the war in Ukraine.

“In the face of economic difficulties, it is important to invest wisely in industries that create jobs and prosperity in Europe. Through this investment, we are building a Europe whose space agenda reflects its future political and economic power. We are boosting space in Europe, launching a new era of ambition, determination, strength and pride. Climate and sustainability will remain ESA’s top priority, our science and exploration will inspire the next generation, and we will build a place where European space entrepreneurs will thrive.

Each member is required to pay for mandatory activities, which include ESA’s science program, while choosing whether or not to participate in optional programs, including launchers and human and robotic exploration.

After some last-minute negotiations that delayed the press conference announcing the results, Aschbacher presented three tables summarizing the total of 16.9 billion euros that the members agreed to provide for the next three years, an increase of 17% compared to the budget of the last Ministerial Council (MC) meeting in 2019. 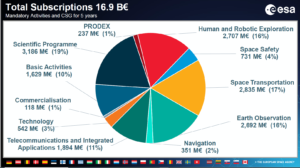 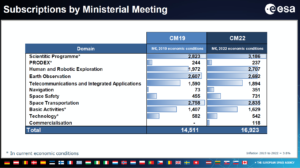 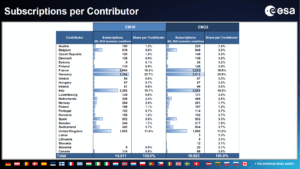 Russia’s invasion of Ukraine on February 24, 2022 disrupted ESA’s cooperation with Russia on launch vehicles as well as the ExoMars mission to send a lander and a rover to Mars. Russia built the lander and was to launch the spacecraft, while ESA provided the Rosalind Franklin rover equipped with a drill to dig 2 meters (6.5 feet) into Mars’ surface.

Russia has suspended cooperation with European company Arianespace for commercial launches of the medium-class Soyuz rocket from two Russian launch sites and the European Guiana Space Center in French Guiana. The ESA prefers to use European rockets, but had to turn to SpaceX to launch two of its satellites while waiting for the entry into service of its new Ariane 6. Another new rocket, the smaller Vega-C, has just made its first flight this summer.

France, Germany and Italy, the three main contributors to ESA, agreed today to fully support Ariane 6, Vega-C, and a reusable Italian vehicle that can remain in low Earth orbit for up to two months called Space Rider. Aschbacher called today’s agreement a “milestone”. He said he feared support for European launchers ‘wasn’t as strong as it should have been’ but ‘thanks to politicians’ who provided ‘clear guidance’, the support required continued. finally materialized.

ESA has ended the ExoMars partnership with Russia and is trying to find another way to bring the Rosalind Franklin rover to Mars. The lander/rover combination is still in Italy, where the rover was built and integrated with the lander. Aschbacher said several outcomes were being considered, including its installation in a museum, but fortunately “Europe will take responsibility” for carrying out the mission using primarily European technology. However, ESA will also be working “with our American friends” who have indicated that they “could contribute” the launch vehicle, brake motor and radioisotope heating units needed to keep the vehicle warm on the Martian surface. . “I have to be very specific that their contribution, of course, has yet to be confirmed as they awaited our decision today.” ESA intends to launch the rover in 2028.

ESA has also confirmed its participation in the NASA-ESA Mars Sample Return mission to bring back samples from Mars currently collected by the Perseverance rover.

ExoMars and Mars Sample Return are part of ESA’s human and robotic exploration program, which will receive 2.7 billion euros.

This includes ESA’s commitment to continue its participation in the International Space Station program until 2030. The United States is seeking agreement from all ISS partners to maintain the ISS until the end of the decade. Japan was the first to officially make the pledge last week. Now the ESA has done it. Canada is also expected to say yes. The most recent indications from Russia indicate that they could do so if they are convinced that their material is technically viable.

Today’s agreement also supports ESA’s participation in lunar exploration with the United States, including additional European service modules for NASA’s Orion spacecraft, the European part of the station. spacecraft Gateway which will orbit the Moon, a logistics lunar lander, Argonaut, and a constellation of communication satellites around the Moon called Moonlight.

The NASA-ESA agreement on Gateway includes a commitment to send three European astronauts there, which Aschbacher sees as a step towards Europeans on the Moon.

Today, ESA also announced its new class of astronauts. A total of 17 have been selected, five of whom are “career” astronauts who will immediately join ESA’s existing astronaut corps. Eleven others are “standby” astronauts who will continue in their current jobs, but are working with ESA under contract to be ready for future flight opportunities. ESA decided to open the astronaut opportunity to people with disabilities and selected a “parastronaut”.